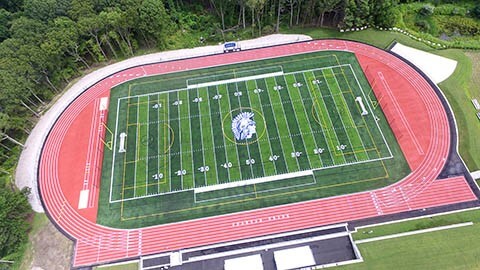 An aerial view of Caito Field shows the new track and field at Scituate High School. The $2.8 million project completed just as school was starting this year, and brings a complete track and field set-up along with a rubberized turf field. By JACQUELYN MOOREHEAD, Valley Breeze & Observer Staff Writer

“We’ve got all of track and field covered,” said S.T.E.A.M. coordinator Shannon Donovan, who threw the javelin in college.

A grand opening for the track will be held during Homecoming week on Friday, Oct. 18, at 7 p.m. before the game.

The entry leading up to the field is repaved, and a set of portable bleachers seating approximately 380 people was installed as well.

Director of School Facilities Robert Corrente said the field is now a state-of-the-art athletic complex rivaling that of local universities.

“The Rhode Island Interscholastic League came out and said this is one of the best tracks in the state,” he said.

Corrente said the project was a big undertaking, one that took the town’s approval of a $4.9 million school improvement bond in November 2017. The repairs were part of the $7.2 million five-year capital improvement plans that will use the additional $2.3 million in capital reserve funds to upgrade schools.

Corrente said the bond approval proved the Scituate community is invested in its youth. He said residents are welcome to use the track, located at 94 Trimtown Road, now that the renovations are complete.

“The community wanted better for our kids. We want people to come back and use the track,” he said.

Though more expensive, Corrente said the decision to switch to turf from grass was the best decision the town could make for many reasons. He said the turf track should last between 10 and 15 years with proper maintenance.

He said watering and maintaining the grass at the field was always an issue with the finicky wells on the property. He said there will be cost savings from no longer mowing or watering the field.

“Dirt fields wear down and need constant maintenance. This will last longer with less maintenance,” he said.

The rubberized surface made from artificial grass over layers of sand and recycled tires has less shock value and reduces the risk of concussion and knee injuries, said Corrente, who noted that the U.S.-produced tires are non-carcinogenic.

Corrente said spiked metal cleats and sports drinks are no longer allowed on the field.

Scituate High School Athletic Director Sal Gelsomino said the School Committee voted to use the best padding on the field with student-athlete safety in mind.

“It’s the best deal for us. It’s all the way around the best surface,” Gelsomino said.

The lines stitched into the field are for multi-sport use, so there will be no need for painting either, Corrente said.

For the past three years, the Scituate Spartans have not had a home field, playing on neighboring town’s turf for home games and practice. Now the football, lacrosse and track and fields team will have a place they are proud to call home, Principal Mike Hassell said.

Hassell said school spirit and sense of pride has increased already in the first two weeks of school. Following a welcome back assembly on the first day of school, Hassell invited the high school class to take a “victory lap” on the field.

“They absolutely love it,” he said. “The sports (teams) can have pride in their high school.”

He said grades 6-12 are already using the field for physical education classes.

He thanked locals schools, North Smithfield in particular, for the generosity over the years.

“We are hoping we can return the favor to any schools who need the use of a complete track and field,” Hassell said.

Though the majority of the work is completed, Corrente said field lighting and an additional fence to prevent spectators from sitting on the leach field is still needed.

In addition to repairs at Caito Field, nearby Manning Field, 368 Danielson Pike, received $100,000 in upgrades as well. Renovations included repairing and installing netting to stop fly balls going behind home plate. Corrente said the infields at the baseball and softball fields were redone as well.

“All our fields are in great shape,” he said.